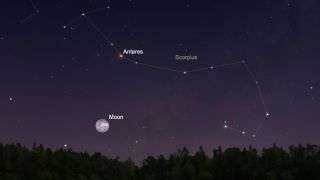 The June 5 penumbral lunar eclipse as seen from Sao Paolo.

Sharp-eyed skywatchers in parts of the world may be able to catch a slight lunar eclipse today (June 5) as Earth embarks on a new «eclipse season,» although North American viewers will be out of luck

Today’s eclipse will be what astronomers dub a «penumbral eclipse,» which occurs when the outer ring of Earth’s shadow just grazes the moon. (During a partial eclipse, the moon falls somewhat into Earth’s inner shadow; during a total lunar eclipse it falls entirely into that inner shadow.)

But it will take a keen eye indeed to notice the penumbral darkening, which will just tint the lower edge of the moon at the midpoint of the eclipse.

The eclipse will also be geographically limited, visible only over central and east Africa, Eastern Europe, western and central Asia, and parts of Indonesia and Australia. It will begin at 1:45 p.m. EDT (1745 GMT) and end at 5:04 p.m. EDT (2104 GMT), according to a NASA chart.

Weather permitting, skywatchers who won’t be able to check out the eclipse for themselves can still keep tabs on the moon digitally, thanks to a livestream from the Virtual Telescope Project. The show will begin today at 3 p.m. EDT (1900 GMT), offering lunar views from Rome, depending on the weather there.

June will also bring skywatchers a second eclipse, this time an eclipse of the sun. On June 21, the moon will pass in front of the sun as seen from Earth but won’t completely cover the star, leaving a so-called «ring of fire» around its outer edge. The annual eclipse, as its known, will be the first solar eclipse of 2020.

Editor’s note: If you capture an amazing photo of the lunar eclipse and would like to share it with Space.com for a story or gallery, send images and comments to spacephotos@space.com.