Home Space and Ufo The first SpaceX astronauts are returning to Earth. Here’s how to watch 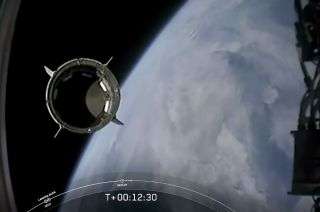 The Crew Dragon «Endeavour» separates from the second stage of its SpaceX Falcon 9 rocket after launching from NASA’s Kennedy Space Center in Florida on Saturday (May 30).

The SpaceX Crew Dragon «Endeavour» is on its way back to Earth with astronauts Bob Behnken and Doug Hurley. If all goes well, the splashdown will mark the completion of a successful first flight of the commercial crew era.

The vehicle is scheduled to splash down in the Gulf of Mexico at 2:48 p.m. EDT today (Aug. 2) after a harrowing drop through the planet’s atmosphere. The Crew Dragon will begin its fall to Earth at 17,500 mph (28,200 km/h), then use its heat shield to slow to 350 mph (560 km/h) before deploying parachutes for the final part of the descent. NASA and SpaceX picked a re-entry site to dodge Tropical Storm Isaias, which is battering the Florida coastline not far away.

Behnken and Hurley undocked from the International Space Station Saturday (Aug. 1), where they’d spent the two months since the May 30 launch. Viewers who want to watch the re-entry live should be sure to tune in here by 1:50 p.m. EDT to catch final preparations. The capsule should re-enter the atmosphere at 1:56 p.m. EDT.

One issue impacting the return: Tropical Storm Isaias, according to the National Weather Service, is centered just off the southeastern coast of Florida today.

SpaceX and NASA had picked out a number of possible sites for the re-entry, shown on the map below. The plan is to splash down at the site near Pensacola, far enough away from the tropical storm. The backup site is Panama City. In either case, a recovery ship will be waiting nearby.

This mission with its two-astronaut crew has served primarily as a test of SpaceX’s Crew Dragon capsule, to make sure that it’s safe and effective for future full-capacity use. In September, SpaceX expects to launch Expedition 65 to the ISS. That mission, which does not yet have a launch date, will be known as CREW-1.

Who Wrote The Pledge Of Allegiance? Inside The Controversial History

Life after death: ‘I saw Jesus next to God’ claims woman...