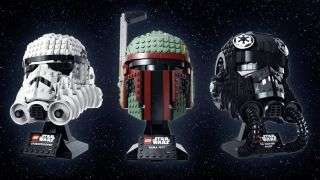 Lego is offering a free Death Star II Battle set for Star Wars purchases above $75 for May the Fourth 2020. Deal ends May 4.

It’s time to suit up for “Star Wars Day” — that annual May the Fourth (be with you) fan celebration that happens on Monday. Luckily, Lego has three new helmet sets to help you get in the right mood.

Supporters of the Empire can choose to build any or all of the following Lego sets: a Boba Fett helmet, a Stormtrooper helmet or a TIE fighter pilot helmet. While the helmets are not wearable, they would look great on a bookshelf or with other items in your “Star Wars” collection. The dimensions are diminutive enough to fit on most furniture, with Boba Fett’s helmet at 8 inches (21 centimeters) tall, and the Stormtrooper and TIE fighter pilot helmets at 7 inches (18 cm) tall each.

There are even name plaques to introduce any of your home’s visitors to the series, before immersing yourself — once again — in the numerous films and TV shows the franchise has generated in 40+ years.

Lego says the sets are optimized for “elite-class building” adults who may be feeling nostalgia for any part of the series (original series, prequels or sequels). The subject matter of these helmets, however, are mostly aimed at people who saw the first trio of “Star Wars” films released between 1977 and 1983.

“Helmets have been a staple in Star Wars iconography since the very beginning, helping to shape the designs of some of the most notable characters in the galaxy,” Derek Stothard, vice-president of licensing at series producer Lucasfilm, said in a statement. .

“It only made sense to immortalize those helmets in Lego brick form. It’s always fun to work with the Lego Group to create new, engaging and mentally stimulating products for builders around the globe, and we’re so excited to bring these Lego Star Wars helmet building kits, and brand-new packaging, to our fans.”

You can find more details about the sets, which launched April 19, on the special “Star Wars” day section on Lego’s website.