Home Space and Ufo Where did the supermassive ‘Mirach’s Ghost’ black hole come from? 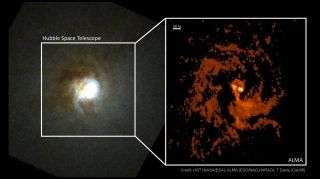 On the left is Mirach’s Ghost as seen by the Hubble Space Telescope. On the right, Atacama Large Millimeter/submillimeter Array (ALMA) data reveals unprecedented detail of swirling gas in the same region.

About 10 million light-years from Earth, a blurry galaxy named Mirach’s Ghost may help unravel a dark mystery:  where the largest black holes in the universe came from. But this ghostly galaxy has also deepened the mystery surrounding these objects’ births.

A black hole is a singularity, a region in space-time where matter has gotten too dense to sustain itself, and collapsed into a formless point. Supermassive black holes (SMBHs) are cosmic monsters, often weighing billions of times the mass of our sun, as compared to the mass of heavy stars that form ordinary black holes. They sit at the centers of large galaxies, sucking up gas and whipping stars around with their immense gravities. There’s one at the center of the Milky Way and an even larger one at the center of the Virgo A galaxy that astronomers have photographed. But it’s still not clear how these mammoth objects formed.

Physicists think there are two possibilities: Maybe SMBHs are ancient features of the universe, objects that directly collapsed out of the hot mass streaming through space after the Big Bang. Or perhaps they formed like every other black hole in the universe: as a result of the detonations of dying stars. If the latter explanation were correct, SMBHs would have started small and picked up additional mass over the course of eons by gobbling up dust and other stars.

«The problem is that in either case most black holes have grown significantly since their birth, swallowing up clouds of gas and dust that swirl around them,» said Timothy Davis, an astrophysicist at Cardiff University in Wales. «This makes them heavier and makes it difficult to determine the mass they began their lives with.»

So Davis and his colleagues went looking for the smallest SMBHs they could find.

These small-supermassives, he told Live Science, «have not had the chance to consume large amounts of material in their past, [so in studying them we are] getting close to revealing how SMBHs must have looked when they were formed.»

The researchers studied the SMBH at the center of the galaxy «Mirach’s Ghost» (so named because from Earth the galaxy looks like an apparition near the star Mirach), using a new technique to determine its mass.

Relying on data from the Atacama Large Millimeter/submillimeter Array (ALMA) in Chile, the researchers measured the speed of carbon monoxide gas as it swirled toward the SMBH at the center of the Mirach’s Ghost galaxy.

«Just like water going around a plug-hole, this gas goes faster and faster as it approaches the black hole,» Davis said.

That swirling is a product of the black hole’s mass, so the speed of the swirling — precisely measured — can tell researchers how much the black hole weighs. ALMA’s images, with a resolution of 1.5 light-years (very detailed for such a distant object), made that possible. This SMBH, they found, has a mass less than 1 million times that of our sun — a baby by SMBH standards. Based on estimates of how much it has grown since its birth, it likely weighed less than 500,000 times the mass of our sun when it was born, Davis said.

—The universe: Big Bang to now in 10 easy steps

—The 15 weirdest galaxies in our universe

—101 astronomy images that will blow your mind

Still, the origin of black holes is a mystery. One problem: Other observations have shown that very large SMBHs existed in their current form very soon after the Big Bang, which defies our assumptions about how quickly black holes can grow.

«We know of two main ways to make SMBHs, and neither of these can make black holes of this size directly. Instead they must have been born smaller and grown to these prodigious sizes. This is really tricky to do, as there is a limit to how much a black hole can swallow in the time available since the universe was created,» Davis said. «Our work reinforces this problem. We have shown that whatever mechanism makes SMBHs allows them to have a mass less than 500,000 times the mass of our sun when they are born.»

While that does tip the scales against the direct-collapse theory, neither theory offers good explanations of where such a small SMBH could have come from. The eventual answer will likely involve some significant modifications to one of the models physicists have right now.

So now physicists know a bit more about what young SMBHs look like. But they still aren’t sure where they came from. The paper describing the black hole at the center of Mirach’s Ghost was published today (July 14) in the journal Monthly Notices of the Royal Astronomical Society.