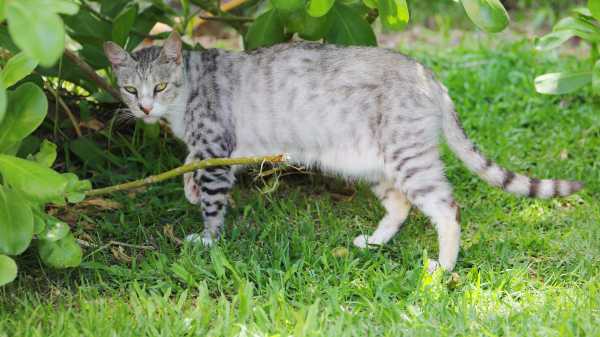 Toxoplasma gondii, a “mind-controlling” parasite that causes the disease toxoplasmosis, has been found in public lands in Oahu, Hawaii for the first time, researchers have discovered.

Though this parasite was previously found in people and in wildlife on the Hawaiian islands, it was unknown in Oahu’s parks. And it hitchhiked there in free-ranging cats, which are a non-native species and are known hosts of the parasite. Thanks, cats.

Though, to be fair, cats aren’t really to blame; people are the ones who first brought cats to the island and then allowed them to roam free. Felines that were abandoned then bred in the wild and formed feral colonies. These cat communities now threaten to expose local wildlife to a harmful and potentially deadly parasite, scientists wrote in a new study.

Toxoplasma gondii is transmitted from cats to other animals — including humans — when cats expel the parasite in feces, in a capsulelike eggs, or oocysts. Once T. gondii oocysts enter a new host they transform to an actively multiplying form called tachyzoites, which can replicate so quickly that they overwhelm the host’s immune system and lead to serious health problems.

One of the ways that Toxoplasma gondii affects mice and rats is by tweaking their brain chemistry to change their behavior. Rodents typically avoid cats, but under T. gondii’s “mind control” they seek out felines. And that’s exactly what T. gondii wants, because the infected rats need to be ingested by cats in order for T. gondii to complete its life cycle.

And cats’ impact on native wildlife doesn’t stop with mind-controlling parasites; they are also highly efficient and deadly predators. Cats kill an estimated 2.4 billion birds per year in the U.S. alone, according to the Hawaii Invasive Species Council (HISC). They have contributed to the extinction of 33 island species and are recognized as the principal threat to 8% of all critically endangered reptiles, birds and mammals worldwide, according to the HISC.

Researchers recently looked for feral cat colonies and signs of Toxoplasma gondii at 32 locations on Oahu’s parks and public lands inhabited by native bird species. They identified 25 cat colonies near places where native birds were plentiful. The exact number of cats in each colony was uncertain, but the scientists spotted roughly 23 cats on average at every location. Humans were feeding cats at most of these colonies, evidence suggested.

The scientists also gathered 56 fecal samples from four of the cat colonies. Three out of four of those colonies had cats shedding T. gondii, with about 10% of the samples testing positive for T. gondii.

“The high percentage of T. gondii-positive feces samples suggests that Oahu’s cats are contributing large quantities of this infectious parasite to parks and neighborhoods across the island,” study co-author Grant Sizemore, the director of Invasive Species Programs at American Bird Conservancy, said in a statement.

“What’s particularly worrying is that these hardy oocysts move through the environment with the potential to infect any warm-blooded species in terrestrial, freshwater or marine ecosystems,” he said.

As the team collected feces at only four locations, it’s likely that T. gondii is even more widespread on Oahu — “and possibly other islands” — and poses an even greater threat to vulnerable native wildlife, the study authors reported.

“Our results should be considered an absolute minimum, and the occurrence of T. gondii in Oahu’s environment is almost certainly higher,” they wrote.

The findings were published online April 9 in the journal Conservation Science and Practice.

Editor’s note: This article was updated on April 16 to clarify that while T. gondii had previously been found in humans and wildlife in Hawaii, this new evidence is the first to identify the parasite on public lands, and to link that presence to domestic cats.