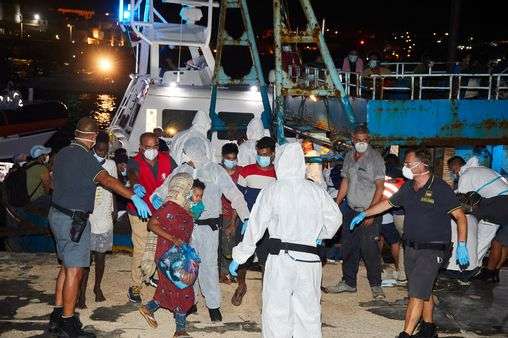 The woman was staying at a migrant holding centre on the small Italian island of Lampedusa. She gave birth on a helicopter while being transferred to a hospital in Palermo, Sicily

Migrants disembarking from a ship in Lampedusa, Italy, on August 30 (Image: Getty Images)

A pregnant migrant with coronavirus has given birth on board a helicopter while being transferred to a hospital in Italy.

The woman was staying at a migrant holding centre on the small Italian island of Lampedusa – off the coast of Sicily.

As the woman had tested positive for Covid-19, health experts decided to move her to the Cervello hospital in Palermo, Sicily.

The city is about one-hour flight from the small island of Lampedusa where she was being held in a reportedly overcrowded holding centre.

However, as time was short, the woman gave birth on the helicopter as she was flying over Sicily’s south coast, according to a spokesperson for the Sicilian government.

The woman was assisted by doctors and staff from the regional health system, according to Italian news agency Ansa. 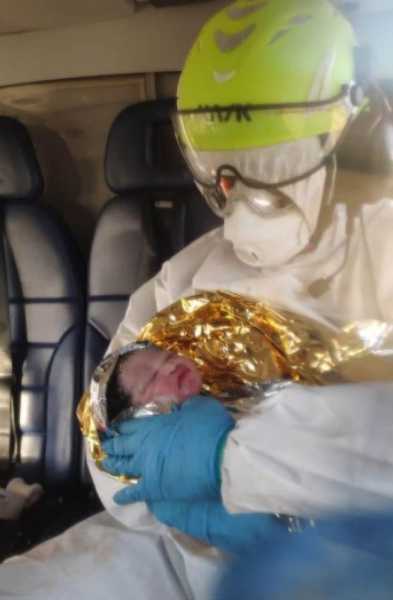 The baby was born in a helicopter
(Image: Newsflash)

Both the mum and the little baby are now in hospital in Palermo.

They will be taken care of and will undergo all the necessary health tests, Ansa reports.

The Sicilian authorities have reportedly been at loggerheads with the central government over the migrant crisis in recent weeks. Rescued migrants off the coast of Palermo, Sicily
(Image: AFP via Getty Images)

Governor Nello Musumeci even accused Rome of not providing enough help to deal with the many landings coming from Africa.

Despite Rome closing its ports to migrant boats because of the pandemic, a rising number of migrants have been attempting the dangerous journey across the Mediterranean to reach Italy’s shores in recent months.

Around 353 people rescued in the Mediterranean arrived in the Sicilian capital to be transferred to quarantine on a ship, according to the Sea Watch charity.

The news comes after 11 days of back-and-forth over where to take them.

"Finally relief for survivors on board," the organisation Sea-Watch said on Twitter. The ship can dock at Palermo as a "place of safety," where it arrived today.

Posting a video showing migrants – including little children – leaving the boat, the charity tweeted: "We are happy that they have been assigned a safe place, but the wait has been too long and very hard for everyone."