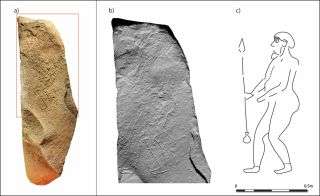 Archaeologists in Scotland have discovered an ancient monolith that’s engraved with a spear-holding warrior sporting an “elaborate hairstyle” and “pronounced” butt.

In September 2017, construction workers uncovered the stone monument in the northwest side of Perth in Scotland while clearing the ground to build a new road. They found the stone face down and buried a little more than 3 feet (1 meter) in the ground.

The so-called Tulloch stone is about 6.4 feet (1.9 m) high and 2.3 feet (0.7 m) wide; on one side, it depicts a human figure holding a spear with a “kite-shaped blade and a doorknob-style butt,” the authors wrote in a paper describing the findings published Jan. 23 in the journal Antiquity.

The surface of the stone was partly broken apart into layers, and portions of the carving were faded. But with the help of 3D imaging and a technique called photogrammetry which involves stitching together hundreds of photographs of an object taken from different angles, archaeologists were able to reconstruct the original design. It’s not clear if the figure was depicted naked, as faint lines at the ankles might suggest he wore shoes or tight leggings.

The stone was buried near a ring ditch, possibly indicating that the monolith was part of a burial, according to the paper. The carving belonged to the Picts, an ancient Celtic-speaking group who lived in what is now eastern and northern Scotland. (The Romans coined the name “Picts,” meaning the “painted people,” possibly in reference to the group’s distinctive tattoos or the war paint they wore.)

In the late Roman period, the Picts helped to defend the area that’s now known as Scotland from multiple Roman attacks; as such, in the early medieval period that followed, war became an important part of how the Picts’ society was organized.

We know from historical records and poetry that “the warrior is an essential part of society, the central part of power,”  said senior author Gordon Noble, a professor in the school of geosciences at the University of Aberdeen in the United Kingdom. Pictish society adopted a warrior way of life initially as a “form of resistance” against the Roman empire, but it later became an “inspiration” and a key part of culture, he added.

It’s not clear what the warrior on this monolith — and similar ones previously found nearby depicting warrior figures holding “doorknob-butted spears” — represent, but they could be depictions of warrior gods or religious figures within this war-oriented Pictish ideology, Noble told Live Science. War ideology was common across a larger part of Europe but was more typically represented through the burial of weapons with the dead.

Such burials, historical sources and poetry that depict  the “heroic warrior ethos” were common across Northern Europe but largely absent from northern Britain in the first millennium A.D. Rather, in northeastern Scotland, such values were publicly shown with carvings on monuments and likely associated with cemeteries belonging to the elite, the researchers noted in the paper.

The Tulloch stone is only one of three such Pictish monoliths found in the area with carvings of warriors on them. But there have been numerous other Pictish stones found with carvings of abstract or animal symbols often thought to be a simple way of representing names, Noble said.

“Over the last 10 years it seems like we’ve had a new Pictish stone every year or even more than one every year,” Noble said. “So I’m sure more will come up, but the stones with images of warriors are still quite rare in the wider Pictish stone corpus.” The stone will eventually be put on display in the Perth museum in Scotland.

Here are the most promising coronavirus vaccine candidates out there