Home Planet Earth An asteroid wiped out the dinosaurs. Then, a volcano helped life flourish. 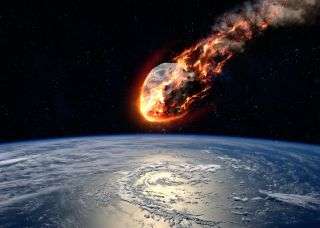 A massive meteorite impact and extreme volcanic activity occurred around the same time that Earth’s large dinosaurs went extinct. But, did the volcanic activity play a role in the mass extinction, or did it actually help new life to flourish?

Sixty-six million years ago, an asteroid smashed into Earth, creating the Chicxulub crater, which is 124 miles (200 kilometers) wide and is now buried underneath the Yucatán Peninsula in Mexico. The aftereffects of the impact caused a mass extinction, decimating Earth’s dinosaur population. Just around this same time (within less than a million years), about 310,685 miles (500,000 km) of lava erupted from the Deccan Traps, a large, igneous volcanic province, and flowed over most of India and into the ocean.

Researchers in a new study have taken a closer look at what actually caused the mass extinction event, and whether or not the volcanic activity at the Deccan Traps, which happened to occur at a similar time, could’ve helped to shape the future of life on our planet.

Scientists continue to debate and study the relationship between these two catastrophic events. Are the impact and volcanic activity actually related to each other? “The short answer is, it looks like an amazing coincidence,” Pincelli Hull, an author on this new study, told Space.com, referring to the short amount of time between the two events. “But people keep trying to figure out if they’re mechanistically linked, at least in part.”

According to this new study, there is still no concrete consensus on how (or if) the two events might have been related, and it’s possible that the volcanic activity might have also contributed to the mass extinction. It’s likely, however, that the asteroid impact was the primary cause of the extinction.

Turning back the clock

To come to this conclusion, the team focused on outgassing from the volcanic event — the release of gases during a volcanic eruption. They were able to model and analyze the effects that the eruption’s carbon dioxide and sulfur emissions had on global temperatures over time.

When the team members compared the results from their simulations and models with records of global temperatures throughout this time, they found that at least 50% of the outgassing from the Deccan Traps occurred well before the meteorite impact. So, only the asteroid impact happened at the same time as the mass extinction event.

In addition to finding evidence to support the theory that the meteorite impact was the main cause of the mass extinction event, the team also found that volcanic gases from the Deccan traps could’ve supported the flourishing of different species after the mass extinction.

By figuring out the timing of this outgassing, the team found evidence to support the theory that “post-event volcanism suggests a role for volcanism in the delayed recovery of biodiversity,” the authors said in the study.

The authors suggest that the volcanic activity and gases released from the activity would’ve caused changes in the carbon cycle, which would’ve allowed the ocean to absorb a lot of carbon dioxide. Being able to see a timeline of global temperatures throughout this time and compare them with their own simulations, they suggest that this could’ve limited global warming that would’ve otherwise occurred.

In limiting more extreme global warming, “Deccan volcanism might have contributed to shaping [the rise of Cenozoic species and communities] during the extinction aftermath,” the study authors said in a press statement.

It’s possible that there could be other explanations for how life on Earth developed following this mass extinction, Hull told Space.com. She said that it’s possible that this volcanic activity was happening and causing these climate effects, but the activity didn’t affect diversification of life on land or in the ocean. However, this new study does show how it could’ve been possible.

This work was published Jan. 16 in the journal Science.