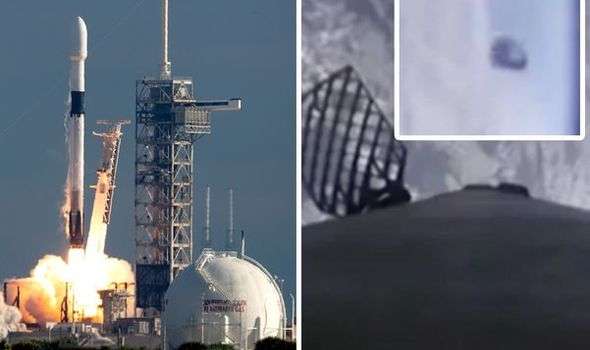 SPACEX’s live stream was interrupted earlier this year when an “anomaly” was spotted flying past the Falcon 9 rocket during its first-stage entry burn into space.

Tonight, Elon Musk’s SpaceX will launch two NASA astronauts into orbit on their way to the International Space Station from US soil for the first time in almost a decade. Doug Hurley and Bob Behnken – two of NASA’s most experienced astronauts – will liftoff from Florida’s Kennedy Space Centre inside the Crew Dragon spacecraft powered by the Falcon 9 rocket. It will be the first crewed mission of SpaceX and marks the return of human spaceflight from US soil since NASA retired its space shuttle fleet in 2011.

But, video footage has emerged this week showing what is being described as an “anomaly” appearing during one of Falcon 9’s last missions to launch a series of Starlink satellites in orbit.

During the live stream posted on SpaceX’s YouTube channel, the footage says: “For those of you just joining us, good morning and welcome, we just had a successful liftoff of the Falcon 9 about four minutes ago.

“There’s a lot going on right now, on the right-hand side of your screen our second stage, its Merlin vacuum engine is currently burning and will continue to do so for a few minutes.

“It’s carrying 60 Starlink satellites for eventual payload deploy, but we’re going to focus the next few minutes on the left-hand side of the screen with our first stage. 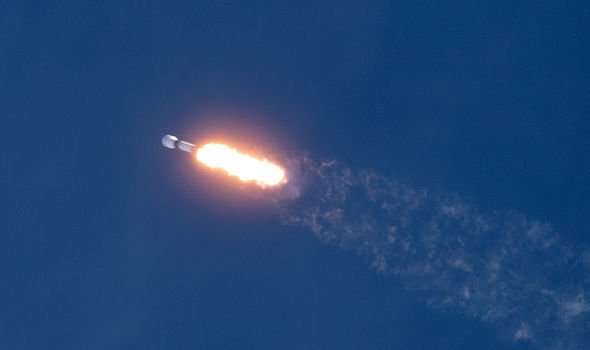 “Currently right now after stage separation, that first stage is boosting, still gliding up without any engine power, and for the next few seconds, it’s going to start to free-fall to the Earth surface for an attempted first-stage recovery on our drone ship in the Atlantic.”

The video then showed the rocket as it was about to split following the first-stage completion.

It continued: “As our first stage reorientates itself, we’re going to prepare for the first of two engine burns on that first stage to aid our recovery – the first of which is coming up in about 90 seconds – known as entry burn.

“We fire three of the nine Merlin engines in the opposite direction to where we are heading to slow down the vehicle about 25 percent before we hit the dense part of the atmosphere.

“Not performing this burn would put unnecessary strain on our first stage. 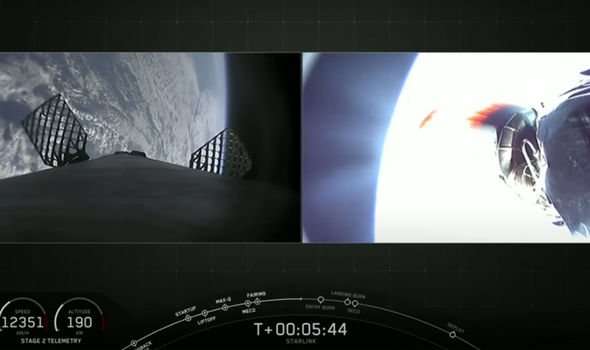 “We’re about 15 seconds away from that entry burn, we’re going to wait for that visual confirmation that the burn has started and call-out says that engine burn was successful.”

It was at this point that a small, metallic-looking anomaly made its way past the camera, but the commentator on the video did not seem to notice it.

Viewers quickly flooded into the comments to let him know, though.

One wrote: “Looks like a piece of space debris.”

Another questioned: “What is the thing that passed the first stage in the right-hand side of the left screen on re-entry?” 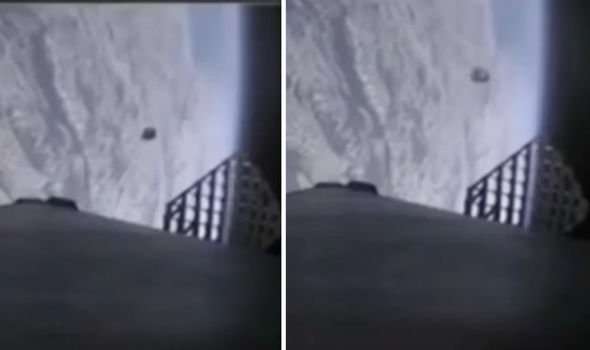 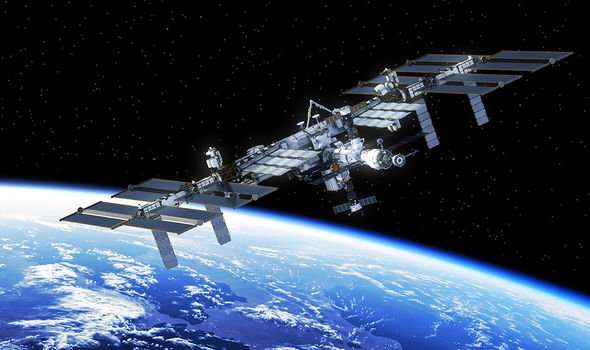 And a fourth even speculated: “Two UFOs flew away, there were two unidentified objects.”

But others suggested something had fallen off the rocket during the engine blasts.

The countdown to today’s launch is under way, although some bad weather could push the mission back to Saturday.

But NASA hopes to go ahead with the mission and restore some positivity back into the world.

NASA Administrator Jim Bridenstine said on Tuesday in a news briefing: “Our country has been through a lot.

“But this is a unique moment when all of America can take a moment and look at our country do something stunning again, and that is to launch American astronauts on an American rocket from American soil to the space station.”

After lifting off, Mr Behnken and Mr Hurley will spend around 19 hours orbiting the Earth before their capsule makes its rendezvous with the space station, where they will stay between six and 16 weeks.

The test flight is the last major milestone for SpaceX under NASA’s Commercial Crew Programme, which was designed to foster partnerships between the agency and private companies to develop new spacecraft for routine trips to the space station.

For the last nine years, NASA has been hitching rides to the ISS aboard Russian capsules and rockets.

NASA says an asteroid the size of The Great Pyramid of...

Life after death: ‘I was holding the hand of Jesus’ claims...