Home Strange news If you’ve never gazed upon the bald butt of a baby tarantula,... 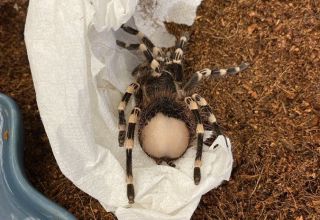 Tarantulas, like all things hairy, sometimes go bald. And for the Brazilian whiteknee tarantula (), baldness starts with the butt.

On Thursday (Aug. 6), entomologist Gwen Pearson tweeted a photo of what that looks like. Pearson and her colleagues at the Purdue Insect Zoo at Purdue University in Indiana recently adopted the butt-nekkid arachnid from the U.S. Fish and Wildlife Service, which seized the spider and hundreds of others from a black market pet importer.

The pink-rumped spider (which zoo officials named «Lil’ Kim» after the rapper who has sported pink hair) does not owe its bare badonkadonk to age; according to Pearson, the specimen is less than 2 years old and may not reach adulthood until she’s 5. Rather, Kim’s bald butt is the result of a natural tarantula defense mechanism — and proof of the physical stress that illegal animal trafficking incurs.

«Itchy butt hair is the primary defense for South American tarantulas, not biting,» Pearson told Live Science in an email. «And it’s SUPER itchy — — worse than fiberglass. An annoyance to humans, but very serious for small mice or other predators attempting to eat a tarantula.»

Though the eight-legged Lil’ Kim arrived at the zoo in a Tupperware container amply padded with paper towel to protect her fragile exoskeleton, the journey was anything but comfortable, Pearson said. Kim kicked off nearly all of her butt hair in transit, proving the spider was under tremendous stress.

Removing spiders from the wild also stresses the environment, Pearson added, and has been linked to species decline — partly because it takes the arachnids so long to mature. Despite this, tarantulas are one of the most trafficked animals in the world, Kelli Walker, senior keeper at the Cincinnati Zoo and Botanical Garden in Ohio told the Cincinnati Enquirer. (That zoo recently adopted eight spiders from the same smuggled shipment for their collection.)

Back at Purdue, Kim will be part of an effort to breed captive tarantulas to help reduce the strain on wild populations. And luckily, Lil’ Kim can count on her butt hairs to grow back soon — however, she’ll have to grow a whole new layer of skin in the process, Pearson said.

«The only way [tarantulas] can replace the ‘hair’ is to completely replace their entire exoskeleton,» Pearson explained. «It’s not hair like ours; each hair is a thin extension of their hard outer shell.»

Immature tarantulas like Lil’ Kim molt their exoskeletons every few months. It might take the arachnid a little extra time to settle into her new habitat at the zoo before she can start molting, Pearson said, but Kim’s butt may be gloriously hirsute again by Thanksgiving. And for that, we can all be thankful.

Newborn baby is already fed up as she frowns at doctor...