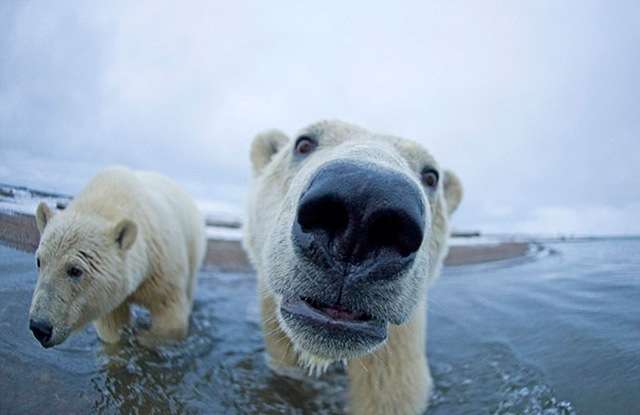 28.03 is International polar bear day. And we think it’s a great excuse to learn more about this wonderful animal.

Polar bears are listed in the Red Book. In the world there are about 26 thousand of them, in Russia there are no more than 5 thousand of these predators.
Polar bears are virtually defenseless against global warming, due to the late formation of ice, these mammals often can not hunt or go to the islands.
Russia is among the top five countries where polar bears live. They also live in Denmark, Norway, Canada and the United States.

In our country, the furry, fur-bearers live in areas from Franz Josef Land and Novaya Zemlya to Chukotka. Umka hibernate in summer (or early fall), not in winter like their brown relatives. This is because hibernation is not a function of temperature, but of the food supply in the environment.

Hibernation of bears is more correctly called a winter hibernation – bears have no real hibernation, as their body temperature almost never drops, and at any moment they can wake up.

Polar bears do perfectly well without drinking water: all the necessary moisture the body of the animal gets with its prey. The animal’s soles are covered with wool, which allows it to withstand the harshest cold, as well as not to slip on the ice when hunting.

There is an educational center “White Bear” in Russia, which was the winner of the National Ecological Award named after Vernadsky. V.I. Vernadsky in 2020 in the category “Environmental Education for Sustainable Development”. Through visual, arts and crafts activities, theater and literature, as well as computer graphics and animation, children learn about polar bears, their neighbors in the Arctic, the region’s nature, and history. You can sign up for classes on the website.

Rosprirodnadzor pays much attention to the Arctic and its ecology, including participation in the implementation of a large-scale project to account for the population of polar bears and other Arctic mammals “Master of the Arctic”. The project started on August 1, will study the number of these predators, their habitat, behavior within groups and interaction with other Arctic fauna.

The main inhabitant of the northernmost reserve “Wrangel Island” is a polar bear. Wrangel Island and Herald Islands, where the reserve is located, are known as the world’s largest concentration area of polar bear ancestral dens. The natural complex of the Wrangel Island Reserve has been on the UNESCO World Heritage List since 2004.