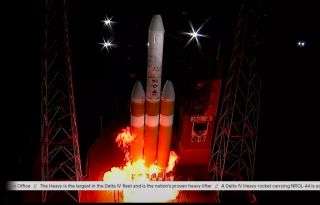 A Delta IV Heavy rocket carrying the classified NROL-44 U.S. spy satellite is seen in a United Launch Alliance video during a launch abort at Space Launch Complex 37B of the Cape Canaveral Air Force Station on Aug. 29, 2020.

The launch of a new U.S. spy satellite on a massive Delta IV Heavy rocket was delayed at least a week after a last-minute abort prevented an attempted liftoff early Saturday (Aug. 29).

The abort occurred just three seconds before the planned launch of the clandestine NROL-44 satellite from Cape Canaveral Air Force Station at 3:28 a.m. EDT (0728 GMT), according to the United Launch Alliance, which built the heavy-lift Delta IV Heavy. The rocket’s triple-core first stage briefly fired up its three main engines, engulfing the booster’s base in flames before flickering out in the abort.

“3, 2, 1 and liftoff!” ULA commentator Dillon Rice said as the engines fired. A few seconds later, it was clear something went wrong as the Delta IV Heavy remained on the pad of its Space Launch Complex 37B.

“And standby, we’ve obviously had a hotfire abort,” Dillon said.

Video from the launch pad showed exhaust billowing up the 235-foot-tall (72 meters) rocket after its engines shut down.

“The launch of a United Launch Alliance Delta IV Heavy carrying the NROL-44 mission for the National Reconnaissance Office was scrubbed today due to an unexpected condition during terminal count at approximately three seconds before liftoff,” representatives with ULA, which is a collaboration of Boeing and Lockheed Martin, said in a statement. “The team is currently reviewing all data and will determine the path forward. The required recycle time prior to the next launch attempt is seven days minimum.”

ULA president and CEO Tory Bruno said on Twitter that the Delta IV Heavy and its payload are in good shape.

“The bird is in good health,” Bruno wrote. “This was an automatic abort during the ignition sequence. Cause appears to have been in the ground system. System functioned as intended to protect the vehicle and payload.”

The NROL-44 satellite on the Delta IV Heavy is a classified payload for the National Reconnaissance Office, which oversees U.S. spy satellite operations. Its exact purpose and design are unknown.

Saturday’s launch abort is the second launch delay for the NROL-44 mission. A planned launch early Thursday (Aug. 27) was postponed due to an issue with ground equipment on the launch pad.

Man who ‘raped his own 80-year-old mum’ found hiding at bottom...