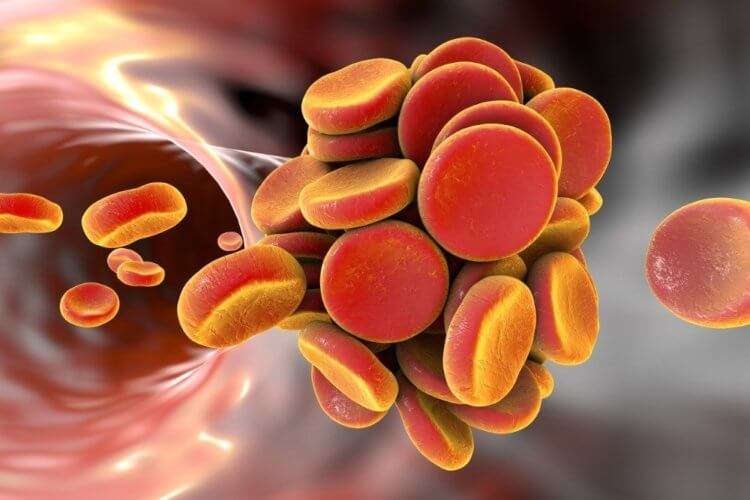 Most cardiovascular diseases are associated with blood clots in the blood vessels. These are caused by a malfunction of the clotting system, one of our body’s most important protective systems. It is responsible for ensuring that the blood in the vessels remains fluid, but at the same time clotting in the case of mechanical damage to blood vessels. In this way it prevents the death of a person from blood loss, which could occur even with minor damage to any of the vessels. Platelets and clotting factors in the plasma are responsible for clotting, that is, clotting of the blood. The clotting system responds to collagen, a protein hidden in the walls of blood vessels. If a vessel is damaged, collagen is exposed, resulting in a clot at the site of damage, which essentially acts as a plug to close the breach. In addition, the clotting system responds to other changes in the cardiovascular system, including changes in blood velocity, indicative of arterial vessel damage. If the clotting system suddenly malfunctions, a blood clot occurs in a perfectly intact vessel. Such disorders can lead to the most serious consequences, up to and including death, so it is extremely important to diagnose any problems with the clotting system in a timely manner.

Blood clotting disorders — what are the dangers?

As you can easily guess, blood clots in the blood vessels deteriorate their permeability, as a result, limbs of the body or even whole organs begin to lack oxygen and nutrients. The danger of a blood clot depends on where in the body it occurs. For example, if a blood clot occurs in the vessels that feed the heart, this important organ literally begins to starve and suffocate. Accordingly, in such conditions, serious diseases develop. An even more dangerous phenomenon is the thrombus rupture, which may lead to heart attack or stroke. Let me remind you that the death rate from these diseases is in the first place all over the world.

There is also the exact opposite situation, when the clotting system stops responding to collagen or a change in the rate of blood flow. As a result, the blood does not clot when there is damage to the blood vessels, that is, when it is actually needed. This leads to the risk of internal bleeding, as blood pours from the vessels through small lesions into the tissues. Avoiding dangerous consequences, as mentioned above, is possible if problems are diagnosed in time. However, it is difficult to detect them, so they are discovered when there are already problems in the body.

Employees of the Moscow National Medical Research Center of Cardiology and the Institute of Medical and Biological Problems of the Russian Academy of Sciences, together with colleagues from Europe, have created a device that allows you to fix clot formation in the blood when activated by von Willebrand factor, which plays an important role in the process of blood clot formation by changing the speed of blood and their attachment to the walls of blood vessels. The details of the device are described in the Journal of Clinical Laboratory Analysis.

That is, the device allows you to determine how prone the clotting system is to clotting as a result of changes in blood flow velocity. The device was tested on two healthy people as well as two patients with clotting system problems. The device accurately showed the likelihood of clot formation and how it changes when different substances affecting blood clotting are added.

This underwater Italian ‘ghost town’ could reappear on land next year