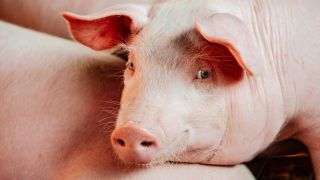 A swallowed pedometer sparked more than indigestion for a pig in the U.K.

A fire on a farm in northern England was accidentally set … by one of the pigs.

The firebug (firehog?) had swallowed a pedometer worn by one of its fellow pigs to demonstrate that the animals were free range, the BBC reported.

But after the pig excreted the pedometer, copper in its battery sparked a flame in the pig dung and dried hay bedding on March 7 at approximately 2 p.m. local time, according to the BBC. The fire spread to cover about 807 square feet (75 square meters) of the farmyard before it was contained, according to The Independent.

Four pigpens caught fire at the farm, located near Leeds in the county of Yorkshire, and fire crews from nearby Tadcaster and Knaresbororough rushed in with hoses to «save the bacon,» the North Yorkshire Fire and Rescue Service tweeted on March 7.

In a photo tweeted by Russell Jenkins, a crew manager for the North Yorkshire Fire and Rescue Service, flames smolder and smoke rises from the ground, as firefighters rake through burning hay and dung.

However, no animals involved in the pigpen fire — including the firehog who inadvertently started the blaze — were harmed by the flames or smoke, according to the firefighters’ tweets.

All materials on this site are taken from open sources - have a link back to the material on the Internet or sent by visitors to the site and are provided for informational purposes only. Rights to the materials belong to their owners. Administration of the site is not responsible for the content of the material. If you found materials on our website that violate copyrights belonging to you, your company or organization, please let us know.
Contact us: infbusine[email protected]